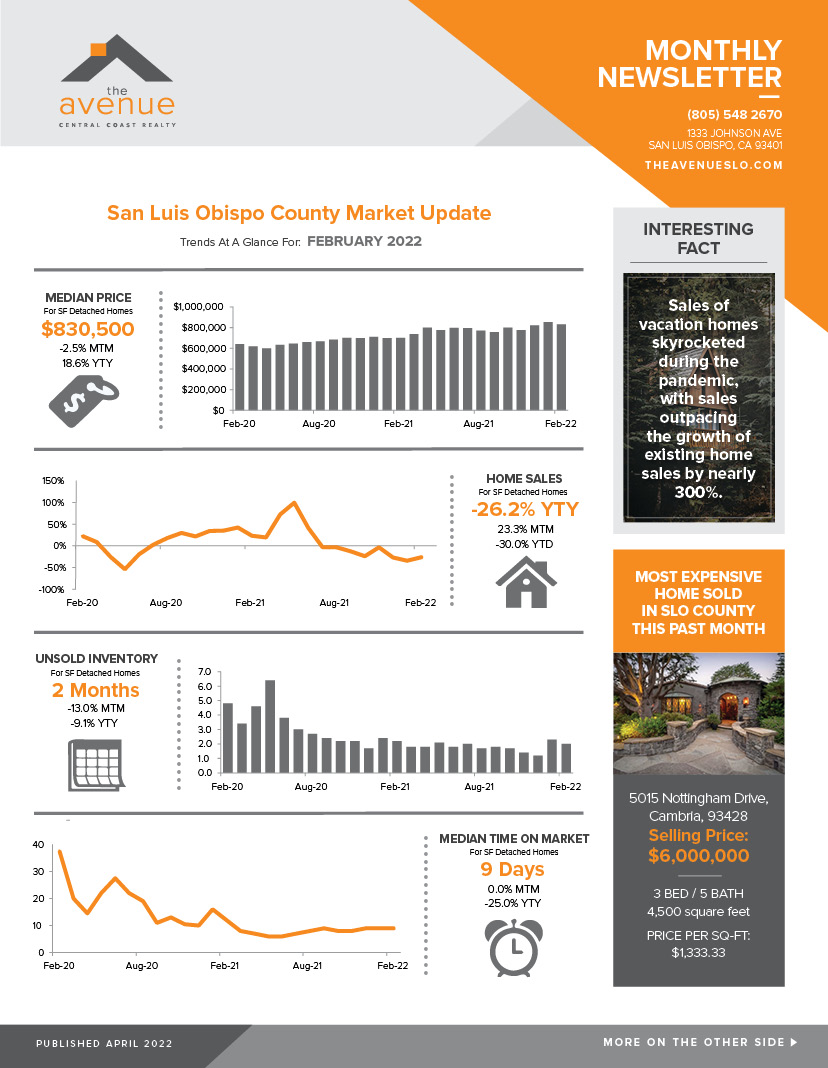 Before Covid, many businesses and industries considered working from home taboo. However, the pandemic has proven that remote work can be productive and efficient, while cutting costs, and helping to attract and retain talent. An untethering of people who previously felt the need to live close to expensive downtowns, has resulted in a massive migration. Remote working is without a question, impacting real estate.

Changing trends: The flexibility of remote work, has created renters and home buyers with new expectations when it comes to their standard of living. They now expect access to the outdoors, for well-being and flexibility. They are asking for a quiet property or neighborhood. They’re increasingly demanding homes with separate office areas or multiple at-home offices that are needed to accommodate two or more adults working from home. Rural areas have become popular (but only if they have access to reliable internet connections). With the increased costs of living, 81% of home buyers also said it was essential or desirable for their new home to be energy efficient in order to cut costs, with energy saving windows and appliances frequently sought after.

Shifts in pricing – small towns vs. cities: At the same time that people have redefined what work-life balance is, the commute has become much harder to sell. Nationwide, home prices have risen 30%, rents roughly 16% and the price of gas 78% over the past two years. A call back to the office now, feels offensive. Asking workers to give up the additional time they’ve grown accustomed to, as well as the money they just don’t have. New connectivity options like Starlink, have proved that small towns are just as good a place to work as any. Thus, remote work has changed the price and value of homes based on location. Home prices have slowed their growth in urban locations, but risen in suburban ones. Values in suburbs and exurbs are up about 30% from February 2020, but only 5% in city centers. Additionally, a typical suburban home spends nine fewer days on the market now than last September, decreasing faster than the typical urban home. According to U-Haul’s Growth index data for 2021, California lost more people to
migration than any other state last year.

Commercial real estate: Many large companies are continuing to occupy the same office footprints they did pre-pandemic, but re-imagining their purpose. They’re designing spaces that encourage colleagues to drop in for collaboration, which means an emphasis on open space, breakout areas and meeting rooms equipped with modern videoconferencing technology. This mixed workplace environment, allows employees to choose which setting works best for them. Some companies undoubtedly have chosen to downsize, leading to an increased demand for smaller spaces. (<10,000 square feet.)

The “donut effect”: It’s projected that migrations to suburbs and exurbs will have a “donut” effect on cities, in that more people will be concentrated on the edges rather than in the center. Services for remote workers will start to move to the donut edges too, making life more easier for service workers, who can live either in more affordable center cities or in rural locations.

The future looks bright: There appears to be a lot of benefits to having people less tied-down geographically. One economist found that if 33% of workers in LA decided to telecommute, home prices in the region would fall roughly 6%. With fewer people on the road, the daily commute would become easier for those who still go into the office. Service jobs would move to the periphery of cities, where workers are relocating, making them more accessible to people who live further from city centers and creating more jobs in those areas. We could see a reversal of “brain drain”. (Educated talent moving to metropolitan areas in order to find employment.) Those people can now stay, keeping their tax dollars in the local economy and funding the public infrastructure such as the very K-12 schools and local universities that helped train them. Aside from just creating happier, more engaged employees; remote and hybrid work options have the potential to improve rural areas. A transition to more permanent remote work will also change downtowns. With less commuters coming into these areas, there’s an opportunity to add more affordable housing, arts and cultural spaces, and other so-called “third spaces” where people spend time away from home, making them even more desirable, over time.

Sales of vacation homes skyrocketed during the pandemic, with sales outpacing the growth of existing home sales by nearly 300%. 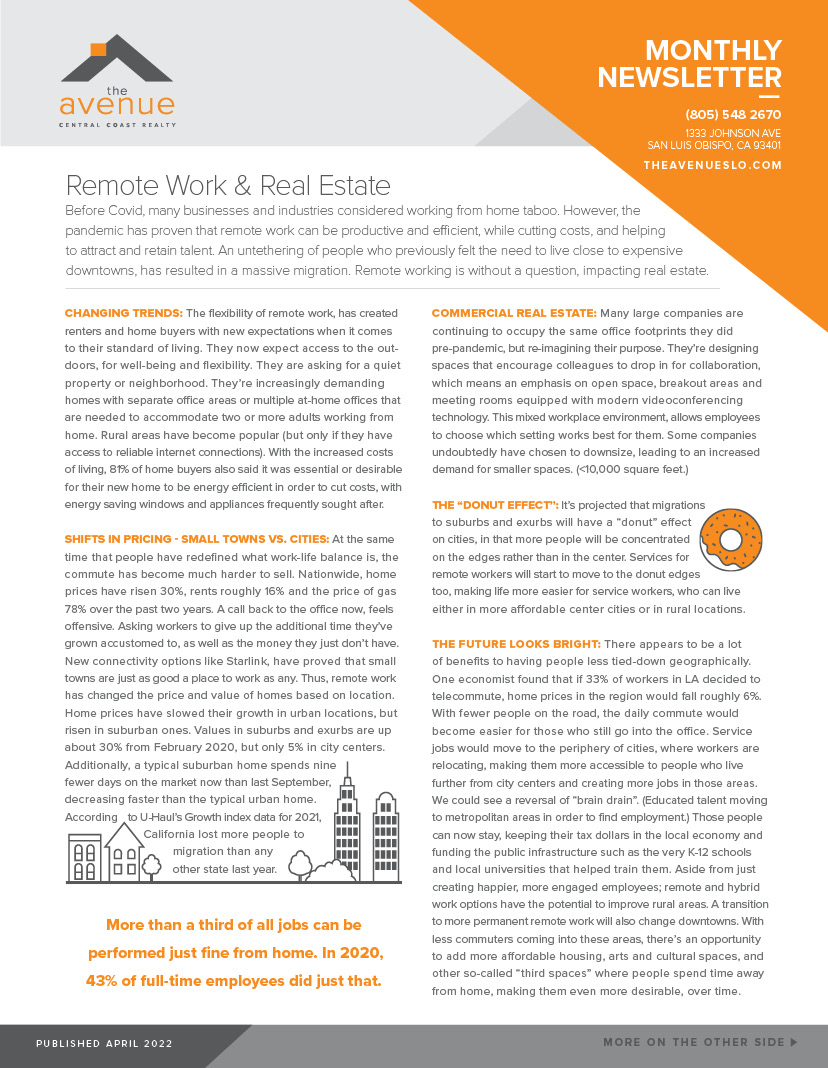 Congratulations Mukta on your recent closing of 3860 S. Higuera St. D23 in SLO! 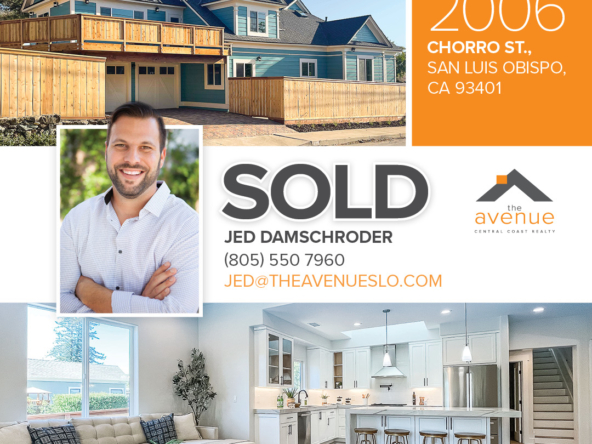 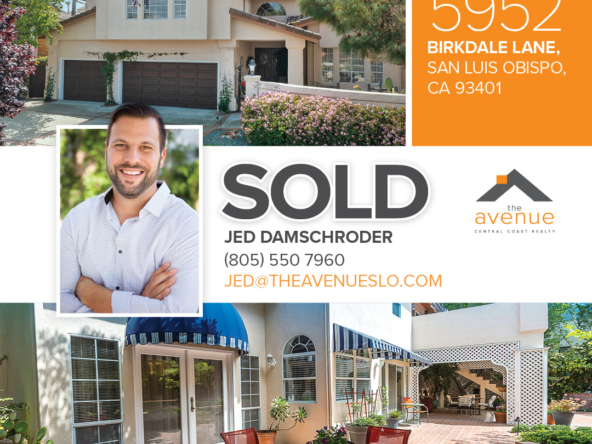 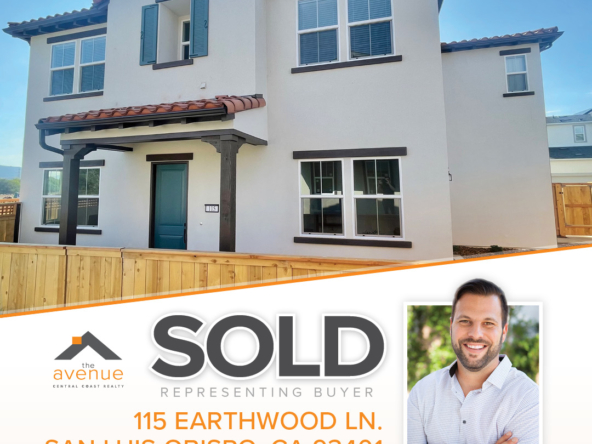 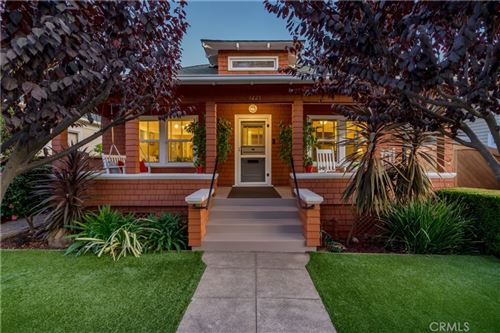 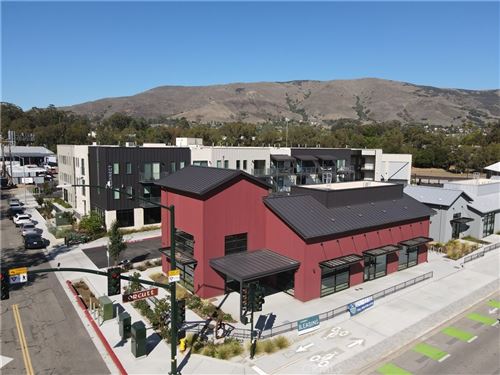 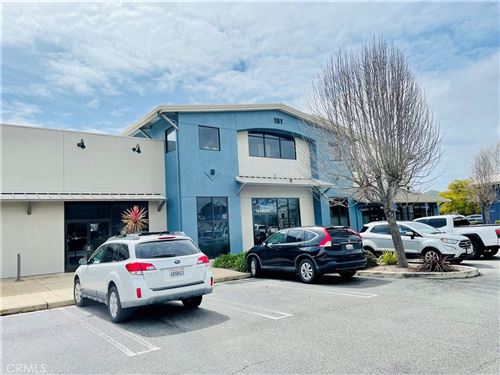 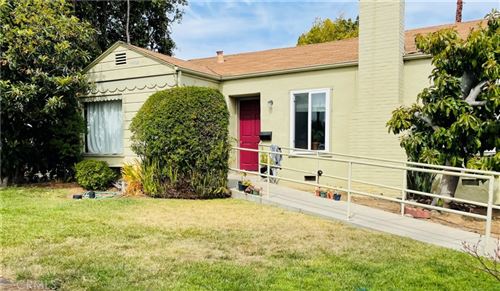 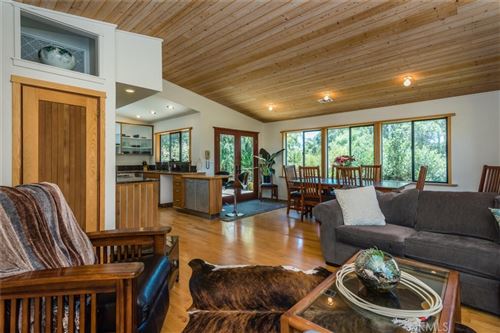